A long-forgotten quote by Johnny Depp - and its redaction - could have repercussions for the actor in his case against Amber Heard... and the case to come.

“Interviewer Jonathan Heaf is desperate to let us know how cool Johnny Depp is,” wrote Anna Leszkiewicz in 2018 for her New Statesman piece entitled Being Accused of Domestic Abuse Does Not Make You Cool. She’s excoriating the award-winning writer for, in her view, implying accusations of domestic abuse are sexy in the November 2018 British edition of GQ magazine.

“[It is] deliberately designed to give the accusations made against Johnny Depp an edge of rebellion.” she wrote. “He’s not an alleged abuser; he’s an ‘outlaw.'”

Leszkiewicz cites passages she refers to as “spineless” attempts “to distance himself from criticisms that he might be lionizing a man accused of domestic abuse.” And she has a point. The article screams Johnny Depp is cool regardless of whether he beat his wife or not.

“Let me be clear,” counters Heaf. “This is not a piece of investigative reporting. It is merely a snapshot, a chance to sit down and talk to a person of immense interest and talent, who has, it must be noted, brought joy to millions of film lovers all over the world.”

This is a point Leszkiewicz calls a Trumpian distraction technique.

Heaf is right, though. The piece isn’t investigative reporting. It’s more like a puff piece conceived and rushed into print to offset the damaging Rolling Stone piece published several months earlier. He reveals the interview was brokered by the magazine and Depp’s “advisors” so the actor could tell his side of the story. What isn’t so clear is how much editorial direction those advisors had over the article’s direction and if they required approval of the final version. Regardless, potentially damaging sections were quickly redacted for the online version after 110,000 printed copies were circulated.

A lot, actually. Little details of Depp’s excessive spending and business acumen, or lack thereof, are prime examples. But most striking is a direct quote from Depp discussing past violent episodes. The print version has a passage that reads thusly: 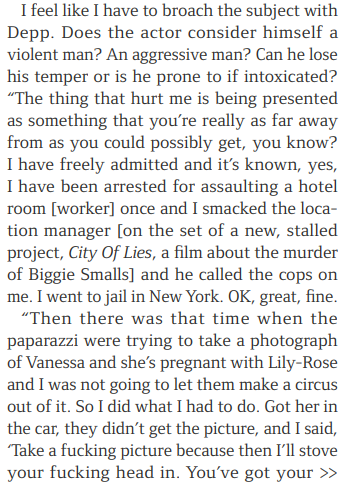 Online readers never saw the lines where Depp admits to smacking “the location manager” on the set of City of Lies.

Why would the magazine remove that passage?

As many are aware, Depp’s next big court case after the current defamation trial with Amber Heard is against Greg “Rocky” Brooks, the location manager Depp admits to hitting in the print version of GQ magazine. The actor maintains he never struck Brooks and has numerous witnesses prepared to testify to that effect. But according to Brook’s suit, the former Pirates of the Caribbean star allegedly punched Brooks twice in his rib cage before yelling, “I will give you $100,000 to punch me in the face right now.” When the crew member did not react, Depp allegedly “continued to scream and berate him in front of a set full of people until Depp’s bodyguards physically removed Depp from the scene.”

Did Depp’s “advisors” demand the redaction?

Interestingly, GQ magazine threw their writer under the bus. Online readers are met with this notice: 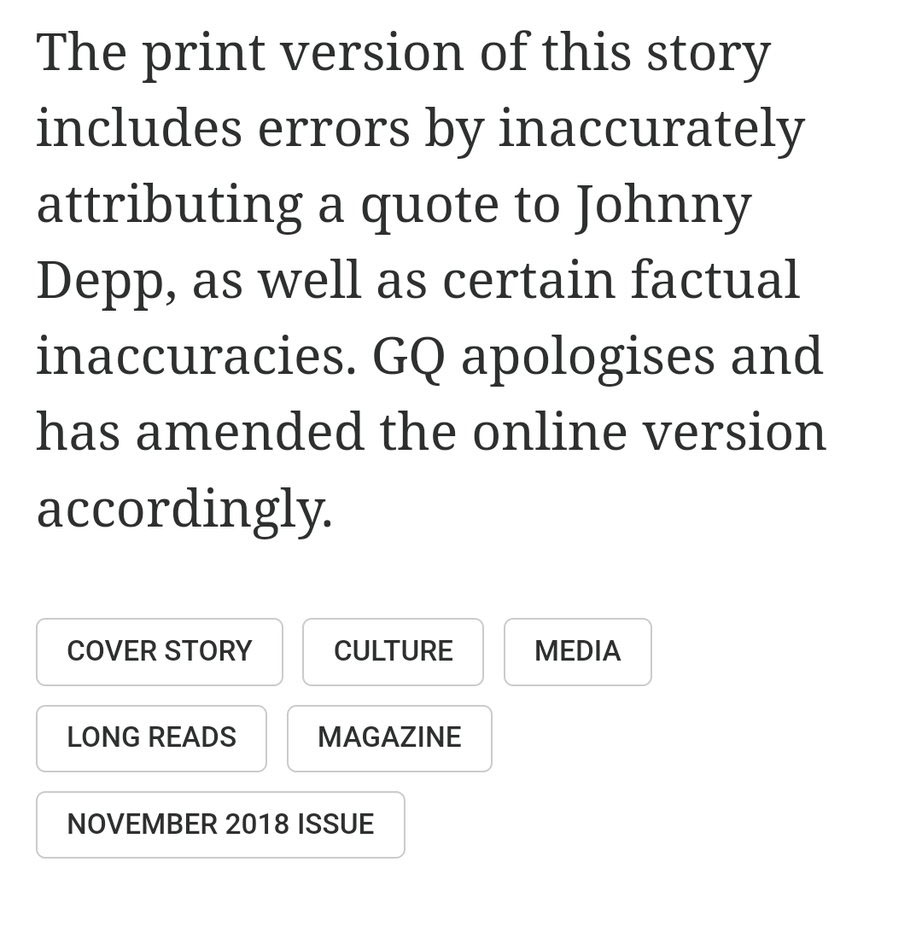 Say what you want about Jonathan Heaf’s handling of the subject matter in his article, but he’s an award-winning journalist. Award-winning journalists don’t misquote people or, as the redaction notice above insinuates, make up quotes. Further, writers often record such interviews to ensure they get it right. It’s doubtful the author made a mistake of this magnitude. It seems far more likely GQ magazine bowed to some sort of pressure from someone to remove that quote before the case went to trial, initially scheduled for late 2019.

Author Johnathan Heaf was asked to comment but did not respond to inquiries.

83 Times Johnny Depp Lied Under Cross-Examination
Johnny Depp and Amber Heard Marriage Counselor: “I Saw Bruising on Her Face… She Hit Him BACK!”
Comment