Jeffrey Dean Morgan is making no secret his desire to portray Thomas Wayne again in a long simmering live action adaptation of Flashpoint.

It’s the casting the fans want for the story the fans love. Jeffrey Dean Morgan, the amazing character actor best known in fandom as John Winchester from Supernatural, Negan from The Walking Dead,  Edward Blake/The Comedian in the 2009 film adaptation of Watchmen, and Thomas Wayne from Batman v Superman, is making no secret his desire to take that latter role again in a long simmering live action adaptation of Flashpoint. 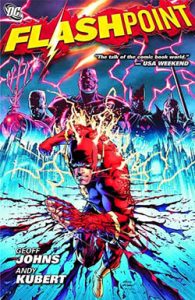 “Look, I don’t know, I mean if there’s a chance they would ask me, I’d say yes,” Morgan told ComicBook.com. “I think the Flashpoint story is, it’s my favorite story. I would love to do it. But, you know, DC is DC and they’re, you know, it’s a constant… it seems like they’re always kinda switching up who’s running it and what they’re gonna do. So hopefully, what I’d like to see is a little continuity with DC, have them get on the track, and then, man I’d be honored and love to do it more than anything.”

For those who haven’t opened a comic book in decades, DC Comics’ 2011 Flashpoint happens in an alternate timeline where it was Bruce Wayne who died in the alley at the hands of a gun-wielding thug, inspiring his middle-aged father, Thomas, to don the iconic bat cape and cowl to strike terror in the hearts of the criminals of Gotham. The comic was adapted as an animated feature in 2013 titled Justice League: The Flashpoint Paradox.

The chances of this happening have grown slimmer in recent years with Warner Bros.’ DC Extended Universe changing directions and several times since the Dean’s possible involvement was first floated.