"Over the course of four short years, Depp has spiraled from an A-list star responsible for more than $10 billion in worldwide box office to Hollywood persona non grata" 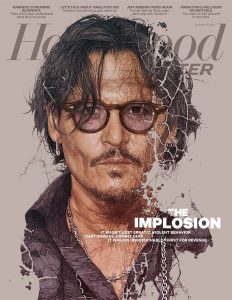 The Hollywood Reporter, Hollywood’s first daily entertainment trade newspaper and one of its most respected, is out today with a devastating look at Johnny Depp’s career death spiral. It documents, among other things, the “erratic and violent behavior that wrecked one of the world’s most bankable stars,” exposes his dealings with former lobbyist Adam Waldman and Saudi Arabian Prince Abdulaziz bin Salman, and compares his social media fans to that of Donald Trump’s.

“Over the course of four short years, Depp has spiraled from an A-list star responsible for more than $10 billion in worldwide box office to Hollywood persona non grata, beginning when (Amber) Heard’s abuse allegations first surfaced in 2016 and continuing through a scorched-earth legal strategy that has seen him sue everyone in his path. The result is a tsunami of tabloid fodder as sensitive texts, emails and drug-fueled and violent anecdotes spilled out into the public view.” Writes author Tatiana Siegel.

His legal wrangling with ex-wife Amber Heard is really only the tip of the iceberg in that sad tale. From the article:

… a text from Depp to CAA agent Christian Carino, who previously repped Heard, in which he wrote: “[Heard is] begging for total global humiliation. She’s gonna get it. I’m gonna need your texts about San Francisco brother … I’m even sorry to ask … But she sucked [Elon Musk’s] crooked dick and he gave her some shitty lawyers … I have no mercy, no fear and not an ounce of emotion or what I once thought was love for this gold digging, low level, dime a dozen, mushy, pointless dangling overused flappy fish market … I’m so fucking happy she wants to fight this out!!! She will hit the wall hard!!! And I cannot wait to have this waste of a cum guzzler out of my life!!! I met fucking sublime little Russian here … Which makes me realize the time I blew on that 50 cent stripper … I wouldn’t touch her with a goddam glove.”

… Depp attempted to interfere with the career of Heard… “I want her replaced on the WB film,” he wrote to his sister, producer Christi Dembrowski, who previously had a deal with the studio and was influential there. During the trial, he admitted that this was a reference to the Warner Bros. film Aquaman, in which Heard starred.

By far the most damaging hit from the (libel) trial was that Justice Nicol said he believed Heard’s abuse allegations. “I have found that the great majority of alleged assaults of Ms. Heard by Mr. Depp have been proved to the civil standard. … I also accept that Ms. Heard’s allegations have had a negative effect on her career as an actor and activist.” Adding insult to injury, Nicol refused permission for Depp to appeal. In short, publications that refer to Depp as a wife beater would have much less fear of legal retaliation. (British standards for defamation make it more difficult for journalists to prevail than in American cases, giving The Sun’s victory all the more significance.) And in Hollywood’s #MeToo era, that presents a PR nightmare that no studio is eager to invite.”

One studio executive who has worked with Depp in recent years says his inner demons had long ago bled into his professional life, making him “a huge liability” thanks to frequent tardiness and costly behavior, all cataloged in the U.K. suit.

“The discovery that came out in that trial alone would be enough to scare any studio,” says the executive.

To many observers, Depp’s negative press was largely avoidable and stemmed from his aggressive legal tactics. The chief architect behind Depp’s sue-’em-all strategy is Adam Waldman, a handsome Washington lawyer with his own sheen of controversy given a clientele that has included Russian oligarchs and Julian Assange. Waldman, who is married to Berlin-based jet-setter and luxury skin-care entrepreneur Barbara Sturm, conducts himself in an unorthodox manner, mocking his legal opponents on Twitter. Sources say Depp met Waldman through Saudi Arabian Prince Abdulaziz bin Salman, the country’s powerful minister of energy, in summer 2016. (Depp spent time aboard the prince’s megayacht in the past.) Waldman quickly became a Svengali figure in Depp’s life, with the actor axing most of his inner circle.

He still has a fan base that in many ways is like Donald Trump’s with their emotional intensity and commitment to a star icon. It’s not based around principles. It’s about charisma and their identification of the range of characters that he’s played.”

Bots, social media smear campaigns… you’ve read about those here but read the entire piece at the Hollywood Reporter.