Man of Steel, the blockbuster reboot of Superman, opens this month in theaters around the world. It marks the sixth major production featuring the last son of Krypton. Although the film is highly anticipated, many movie goers, comic book fans and feminists are raising the question: Why is Hollywood ignoring Wonder Woman? Intelligent, powerful, alluring and sexy, Princess Diana is the perfect role model for today’s women, a steadily growing part of science fiction and superhero movie audiences. Could these very traits be the reason she’s getting the cold shoulder from tinsel town? The answer might be yes.

Should We Let Hollywood in on a Secret?

If Hollywood is smart, they will take advantage of the fact Wonder Woman captivates both males and females. Young girls have preferred Wonder Woman over other superhero comics since her birth in the early 1940s, accounting for 10% or more of her sales. No other super hero come close in terms of female readership. Even so, 90% of Wonder Woman’s readers are male.

Comic Buyer’s Guide’s ‘100 Sexiest Women in Comic’s placed Wonder Woman at number 6 on the list. In addition, she ranked 5th in IGN’s top 100 Comic Book Heroes of All Time. She was also the star of a successful mid-1970s television show – one that has endured for three decades, making actress Linda Carter’s portrayal of the character a cultural icon. Yet, despite the immense popularity and rich history of the character, several attempts to bring her to live-action film and television have failed. 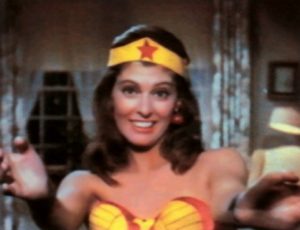 Why Hasn’t Wonder Woman Made a Come Back?

Wonder Woman’s first incarnation as a live-action hero came in a little known 1967 pilot for a TV show called Who’s Afraid of Diana Prince? William Dozier, executive producer of the campy 1960s Batman series, wanted to give it the same treatment. Fortunately the four-minute short film pitched to Warner Bros. was nixed. It stared Ellie Wood Walker as a frumpy plain Jane with no self esteem who sees Wonder Woman when she looks in mirrors. There’s an implication that she’s delusional. This isn’t quite the treatment fans of Wonder Woman would have latched on to. It was the 1960s and women’s liberation was in full affect. Ms. Magazine would, just a few years later, make Wonder Woman their unofficial symbol of feminism in general and the women’s liberation movement specifically. Network TV deflected the proverbial bullet when this treatment was declined.

1974 saw Wonder Woman make her debut on network TV with ABC’s Wonder Woman, starring Cathy Lee Crosby. Again, producers tried to tinker with the formula. The version of the Princess of the Amazons was blonde, wore a costume that resembled an airline attendant’s, had no super powers, had no secret identity and worked for a government agency. Ratings weren’t wondrous and ABC admitted trying to update the character was a mistake.

To their credit, the network didn’t give up on Wonder Woman and another pilot was in production within a year. Eager to distance themselves from the last pilot, producers went with an unknown actress named Linda Carter for the lead. The pilot followed the original comic book closely, in particular the aspect of Wonder Woman joining the military under the name Diana Prince. The character’s traditional suit was also retained. It was a ratings success and lasted three seasons.

According to the website IO9, NBC tried to launch a live-action series with Deborah Joy Levine (Lois & Clark: The New Adventures of Superman) in 1997. Diana would have been a Greek history professor at UCLA. A casting call was issued, but they couldn’t find an actress who could live up to Lynda Carter’s portrayal. In an interview at the time, Levine said her Wonder Woman would have “a hard time juggling her personal life with her work. It’s like, ‘I’ll save the world, come home, pop a Lean Cuisine in the oven, and watch the soap I taped this afternoon.’ In many ways, she’s like a real woman, a real person.”

Buffy the Vampire Slayer creator (and eventual Avengers director) Joss Whedon was attached to bring Diana of Themyscira to the big screen in 2007 but he could not reach a script agreement with Warner Brothers and eventually parted ways with the company over ‘creative differences.’

George Miller was set to direct a Justice League movie in 2008 that was shelved because of a Hollywood writer’s strike. One of the few roles to be cast before the production ended was Wonder Woman (Megan Gale.)

In 2011, Adrianne Palicki was suited up and ready to become TV’s new Amazon princess. There was media criticism of Wonder Woman’s costume. It was called “trashy and porn-y.” Although Warner Brothers changed the costume, NBC didn’t pick it up for a TV series. The original costume was tight; however, Superman’s costume in the upcoming “Man of Steel” is also very form fitting with nary a peep about it.

Does this present a double-standard regarding male/female costumes?

There were problems with the 2011 TV plot as well. Wonder Woman has her iconic golden Lasso of Truth; however, she uses is to entangle her victim rather than using it to force anyone to tell the truth. In one scene, Wonder Woman breaks a man’s arm to get him to speak instead of using her magical Lasso.

But, things may be making a turn for the better. David Goyer, the “Man of Steel” screenwriter, wants to revive Wonder Woman, yet he doesn’t know who should play her role.

Warner Brothers doesn’t appear to be giving up on Wonder Woman since a movie script is apparently still being developed.

The director of “Drive” has also made it known that he wants to direct a Wonder Woman movie, and he wants Christina Hendricks to play the female super hero. Even better – curvy Christina wants to suit up to be a powerful heroine with a golden lasso.

The CW TV network developed, then trashed, then promised to redevelop a young Wonder Woman show in the style of Smallville to be titled Amazon.

In 1941, the first Wonder Woman comic hit news stands, created by an intriguing psychologist named William Moulton Marston. A great deal of Marston’s studies centered around sexual enlightenment. He was also in a polymourous relationship with his wife, Elizabeth Holloway, and Olive Byrne. The three of them lived happily together in one home.

Elizabeth went to Boston and Radcliffe where she studied psychology and law. The fact that Elizabeth was a strong, loving and intelligent woman is notable since Wonder Woman was given many of the same characteristics as her. In fact, it was Elizabeth that told her husband to make his superhero a super heroine.

Wonder Woman had the power to deflect bullets with the manacles she wore around her wrists. As pointed out above, Olive Byrne also wore manacles.

Before Marston created Wonder Woman, he invented the polygraph, which served as a precursor for the modern lie detector test. The connection between the polygraph and Wonder Woman’s Lasso of Truth is hard to overlook; therefore, it is reasonable to conclude that the magical lasso was inspired by the lie detector.

The Sexuality of Wonder Woman Exposed

Marston himself said, “Wonder Woman satisfies the subconscious, elaborately disguised desire of males to be mastered by a woman who loves them.”

One of Marston’s comics has Wonder Woman state, “Some girls love to have a man stronger than they are make them do things. Do I like it? I don’t know – It’s sort of thrilling. But – isn’t it more fun to make the man obey?”

The original Wonder Woman is an Amazonian princess who left Paradise Island, which is an Amazon kingdom.

The fact that Marston chose Wonder Woman to be an Amazonian princess reveals more about her character.

Legend says the Amazons were the mightiest women who ever existed. People in the ancient times believed they were a tribe of powerful, independent woman who rebelled against a society dominated by men. In modern times, it is accurate to say they were the first feminists.

Who Should Play Wonder Woman?

Wonder Woman has blue eyes and dark hair – she is curvy with bodacious breasts – and has strong, muscular arms. Scarlett Johansson could quite possibly make a wonderful Wonder Woman with her hair colored brown. Alexandra Daddario may be able to pull off the original Wonder Woman look with no problem.

The original Wonder Woman was perfect. Perhaps one reason she has failed to make it to the big screen is because the script writers kept trying to change her. Some have even stripped her of her powers, and you cannot have a super heroine without powers.

Who Should Write the Script for Wonder Woman?

Perhaps a woman should write the script for Wonder Woman. In almost all instances, she has been written by a man. There was one attempt by two males and one female – but it also failed. In addition, it would be suitable for someone with a similar belief system to Wonder Woman’s creator to bring her back to life in her original form.

Lost Girl and the Rise of the Empowered Heroine in Movies,TV, and Fiction
Comment